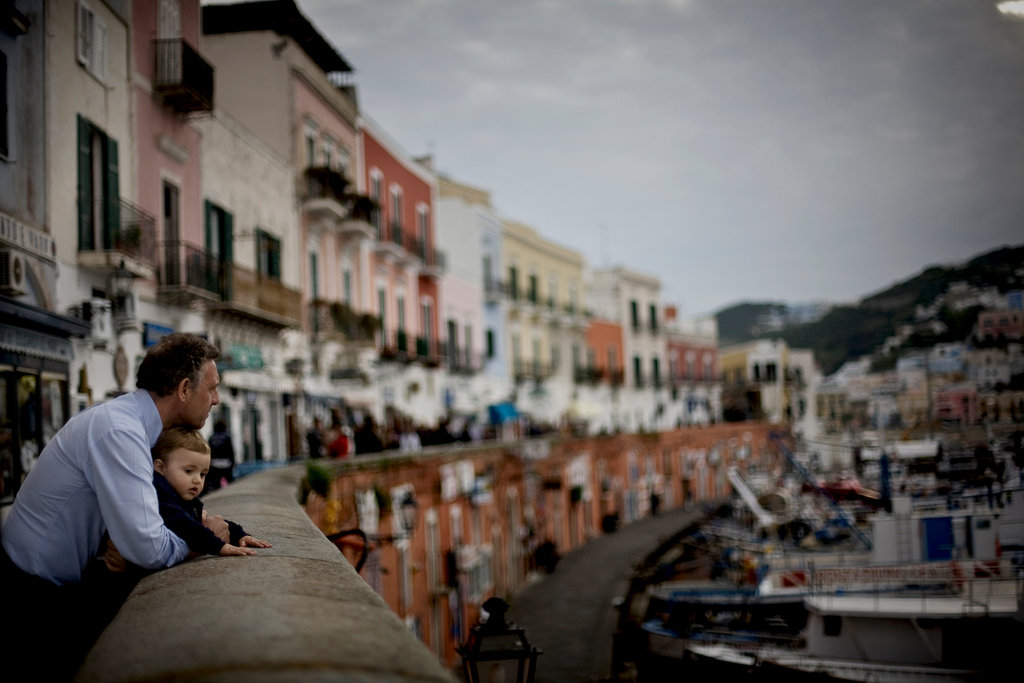 ARRIVING by ferry or hydrofoil at Ponza, an island in the Tyrrhenian Sea, the boat trims the island’s eastern coast, a vista of sheer tuff cliffs bleached white by the sun and eroded by water and wind.

Indeed, the best vantage from which to appreciate Ponza is from the sea. During the high summer season — particularly on weekends, when Romans journey two hours to dine on fish and escape the oppressive heat of the capital — waterfront spots accessible by land attract crowds, with hardly an inch to lay your towel on the rocks. But by boat, the island’s charms come to life.

Vessels dock in Ponza’s sheltered port, the largest settlement on the island, which locals refer to simply as Porto. Its boxy houses form a pastel mosaic that traces the volcanic terrain over the area’s two peaks. Restaurants, cafes, bakeries, fishmongers and produce stalls surround the port, which is generally filled with boats. Porto retains the beauty of its origins as a simple fishing village — a destination popular with people from the mainland, but still unspoiled for visitors from afar.

Modern Romans are not the first to use Ponza as a summer getaway. In Imperial times, nobility built villas on the island, exploiting its vistas as they relaxed in swimming pools hewn from rock. After the fall of the Empire, the island was abandoned and was not repopulated until 1734, when Charles III of Spain — at the time southern Italy was ruled by the Bourbon dynasty — founded Porto. A few decades later, Ponza’s second village, Le Forna, was settled by inhabitants of Torre del Greco, a town on the Bay of Naples.

A cluster of flat-topped buildings strung along a plateau at the island’s center, Le Forna is just a walk away from the water. Follow signs down paths that lead to the sea and the Piscine Naturali, saltwater pools formed by ancient volcanic activity. This is where you are likely to find the crowds — all the more reason to head to Porto and enjoy the solitude of your own boat.
Renting one on Ponza is surprisingly easy, requiring only a valid driver’s license. Porto is packed with rental companies, including Diva Luna, which sits on the road fronting Spiaggia di
Sant’Antonio, the little beach in Porto. The company’s English-speaking owner, Emanuela Siciliani, rents small outboard boats and inflatable speedboats. “Watch out for the rocks in the shallow water,” she cautioned. “If you scratch the propeller there is a 100-euro penalty.” (Payment for the boat is by cash only.)

In addition to a stern warning, customers are given a map of the island and a 90-second crash course in boating before being pushed out to sea. Once out on the open water, you are free to navigate Ponza’s scalloped coast, drop anchor in its sheltered bays, read a book in the shade of its cliffs and explore its ancient grottoes.

The most intriguing of these are called Pilate’s Grottoes, a series of cave pools that were carved by hand. (Bring a flashlight and goggles or a mask, Ms. Siciliani recommended.) Once there, simply drop anchor and swim inside.

Locals say the grottoes once belonged to Pontius Pilate, though strong evidence is lacking. They also suggest that they served as pools where fish, primarily moray eels, were raised for the Roman elite. But the statues and artwork that have been discovered there suggest a more luxurious use, perhaps as saltwater swimming pools, a noble dining area or a cult site.

In addition to its man-made grottoes, Ponza’s topography is rich and varied — a veritable geology lesson. Rounding the promontory past the grottoes, the Faraglioni della Madonna is a collection of rocky stacks whose brown stone surfaces resemble knotted wood. La Punta di Capo Bianco is a cluster of volcanic stone towers with knobby peaks chiseled from the volcanic mountainside by sea, air and wind. Chiaia di Luna is an enormous bay with a massive curving tuff wall made by a volcanic deposit whose name betrays its moonlike appearance.

A 20- to 30-minute boat trip from Chiaia di Luna, whose name lies Palmarola, Ponza’s closest inhabited neighbor in the Pontine Archipelago. The sparsely populated island has the area’s most bizarre and beautiful geological formation, La Cattedrale, gray volcanic rock whose stone ridges leap upward from the water like the vertical ribs of a Gothic cathedral. There is only one sand beach in Palmarola, with a couple of seaside cafes. If you arrive by boat, you can dock there and wade ashore. There are also group tours, which depart from Ponza Porto, though be prepared for irritatingly loud music.
A view of the picturesque town of Porto.
NADIA SHIRA COHEN FOR THE NEW YORK TIMES
Back on Ponza, Chiaia di Luna is home to one of the few sand beaches accessible by land. Another beach, Spiaggia di Frontone, is served by a regular ferry from Porto. The boat deposits its passengers on a strip of sand with a few bars and beach clubs that rent umbrellas and lounge chairs. At the north end of the beach, a path carved into the rocks leads uphill to the Associazione Culturale Cala Frontone, an informal restaurant and small museum operated by Gerardo Mazzella.

“When I began to build up here, everyone said I was crazy,” Mr. Mazzella said. His simple endeavor, dubbed Da Gerardo by regulars, has turned out to be a huge success. Sailboats and yachts drop anchor in Frontone bay and their passengers make the hike up to this rustic spot for its homemade island food and sweeping views across the bay to Porto.

The property belonged to Mr. Mazzella’s grandfather and, feeling an intense connection to his ancestral land, he fashioned an ethnographic collection out of family heirlooms. Soon, other island dwellers contributed their own artifacts, and now several rooms adjacent to the restaurant display antique fishing and herding implements, peasant clothing and photographs that recount the story of Ponza’s dual nature.

“The Ponzesi had to be good at two things to survive: fishing and farming,” Mr. Mazzella said, using the term for Ponza natives. “They were skilled fishermen, teaching their craft to others in Tuscany, Sardinia and even Tunisia. But the island is fertile and they learned to cultivate the earth, too.”

On Da Gerardo’s menu, locally grown lentils and cicerchie, a chick pea-like legume cultivated on the island since antiquity, are the basis for hearty soups, while savory pies are filled with leafy greens and local cheese. Fried moray eels are served with a wedge of lemon, and octopus is stewed with potatoes.

From its high perch sheltered by thatch pergolas, Da Gerardo is a wonderful spot to appreciate the duality of Ponza, a place that calmly walks the line between remoteness and accessibility, where land and sea collide.

Sorgente: Off the Roman Coast, Bobbing for Views